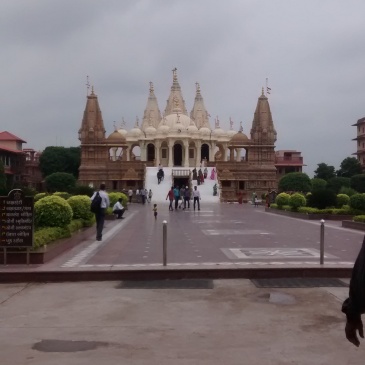 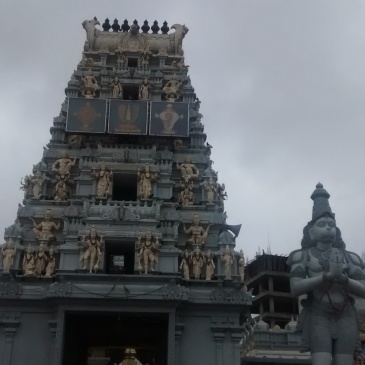 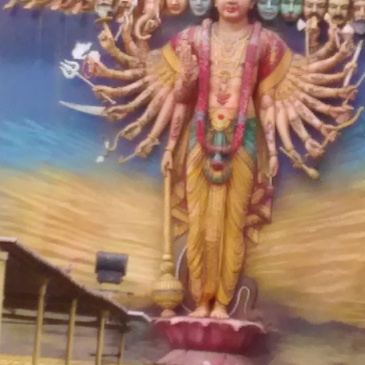 There is also a Vishnu temple close by.   Halt at Somnath. 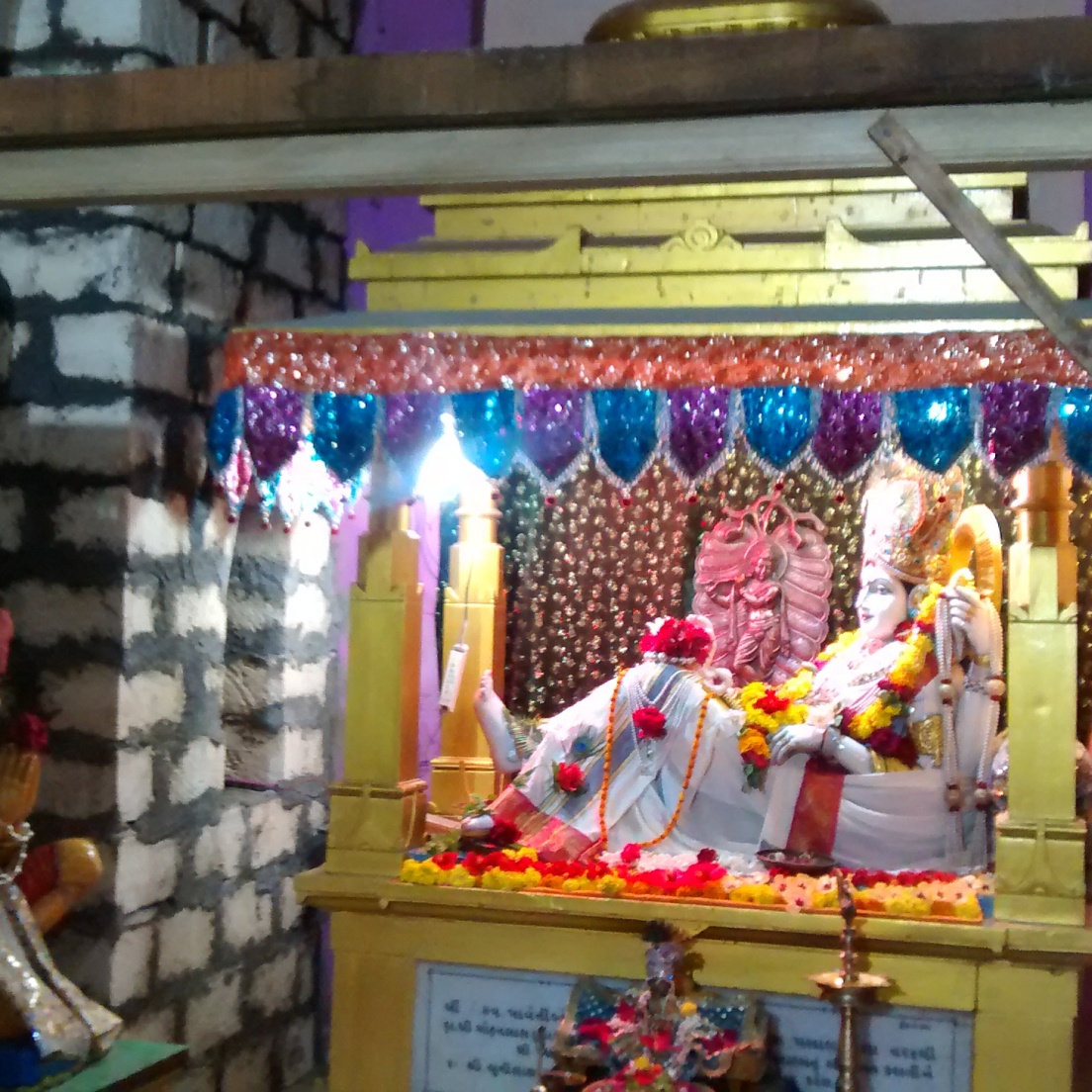 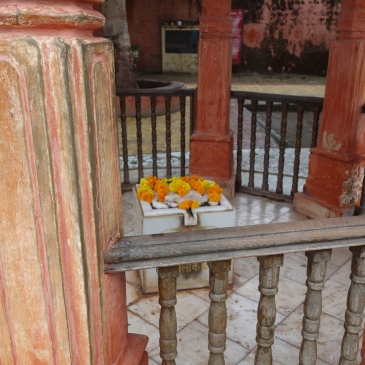 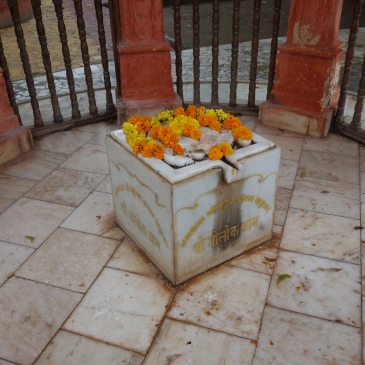 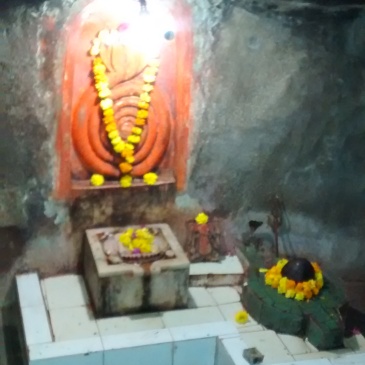 Balka Thirth is the place from where Lord Krishna went back to Vaikuntam. As per Bagavatha Purana, when Krishna was relaxing with his legs crossed a hunter mistook his fingers in the leg to the ear of a deer and shot an arrow. Using this as “Vyajyam” Krishna left the earth and went to Vaikunth from this place. You can also see a place from where Balarama went to Pathala Loka (situated in the same compound).

On the way to Dwaraka is situated a temple called Mool Dwaraka (very small temple) but nothing much to see here.

Reached Dwaraka in the evening and visited the temple. Must see in the temple is the change of Dwaja (flag), which is 40 mtrs in length. The person who is changing does not have any support except his faith on Krishna when he climbs the height to change the flag.

Aarti at Dwaraka is not to be missed as the atmosphere is electric and the music is divine.

On the way visited Rukmini Temple and Bet Dwaraka.

This temple stands 2 km away from Dwarka City. The local explanation given for this distance is an old legend. They say, once Lord Krishna and his wife Rukmini went to the sage Durvasha to invite him for dinner at Dwarka. He agreed on the condition that Krishna & Rukmini would have to pull his chariot instead of any animal. The couple happily obliged. While pulling the chariot, Rukmini became thirsty so Lord Krishna prodded his toe into the earth to draw a spring of the holy Ganga water. Rukmini took a sip without offering Durvasha. Annoyed by her impoliteness he cursed Rukmini that she would be separated from her beloved husband. Hence Rukmini temple is located 2 kms away from Dwarka’s Jagat Mandir.

The temple authorities will ask for donation for “Thirtha Danam” and be prepared.

Bet Dwaraka: You have to go to this place using a boat (ferry) and it is available every 15 minutes.

Gopi Talav: Place where all the 16000 Gopis committed suicide as they could not bear the separation from Lord Krishna, is nearby Dwaraka.

Halt at Ahmedabad that night.

Dakor Dwaraka: The only place where Krishna keeps his eyes fully open (in all other Dwaraka his eyes are partially opened).

Local pandit (Sri Harshad Bai Pandya – phone 9898217967) who passionately narrated the story about Dakor Dwaraka and it goes like this:

Bakthanand and Ganga Bhai are couples who are devotees of Dwarakadhish and Bakthanand used to visit Dwaraka twice a year by foot to have a darshan of Lord Dwarakadhish. He was working in the field and did not posses any wealth. From the young age of 7 until 70 he was doing this without fail. when he visited at the age of 70 he told Lord Krishna that he may not be able to make a visit in future as he has become weak. Lord Krishna told him to come once with a bullock cart and promised to come with him in the cart. He was so pleased and went around the village asking for Bullock cart with everyone who was owning the cart to fetch Lord Krishna. Everyone thought that he has lost his mental equilibrium and evaded from giving their cart. Finally one person gave him the bull which were not useful for farming and similarly he also got a old cart. He took the cart and went to Dwaraka and as usual stayed in a Brahmin’s house (since he will get free food there). When the Brahmin asked him why he has come in a cart this time he answered that Krishna has asked him to bring a cart and promised to come along with him to his village as he cannot make it to Dwaraka anymore.

He went to have a darshan of Krishna and informed him that he has brought a cart as per his request. Krishna promised him that he will come during midnight and they can leave for his village. As usual that night the king has locked all the doors of the temple and sealed the same and kept his army as security. During midnight Krishna came and joined Bakthanand who was waiting for him in the cart and they drove towards the village of Bakthanand (current Dakor). After some distance Krishna told his Baktha to take rest and drove the cart and by early morning came close to his village and woke up Bakthanand and on the way plucked a small branch of a neem tree and used the same to brush his teeth and gave a small stick to his Bakthan also. We were told that even today the tree is in existence and the leaves in that branch alone is sweeter while the rest are bitter. Once Krishna reached Dakor, he asked Bakthanand to put him in the nearby river and he did the same, without asking the reason.

In the mean time King came and opened the door of the temple the next day only to find that the god is missing inside. On enquiring the Brahmin in whose house Bakthanand stayed informed the king that Bakthanand was mentioning that Krishna is going to come with him and they came to a conclusion that Bakthanand should have stolen the murthy. King sent his army stating that in the bullock cart they should not have gone far. The army came in search of Bakthanand but could not find him. The king then came in search of Bakthanand to his village with his army. On hearing that King is coming to his Village, Bakthanand came to receive the king with a pot full of yoghurt. Without knowing this one of the army man killed him with an arrow.

King then went to Ganga Bhai, the wife of Bakthanand and asked her where the murthy is. She said it is in the river. On finding the murthy they also noticed the blood was coming out at the same place in murthy where Bakthanand was hurt by the soldier. King asked his men to bring the murthy from the river. Even more than 20 of the king’s men could not bring the murthy from the river. King then decided to leave the murthy in the village but the Brahmins of Dwaraka refused to come back as they will not have living without a murthy in Dwaraka. They wanted to stay back in Dakor and wanted to starve to death until murthy is brought back to Dwaraka.

On hearing this Ganga Bhai went to Krishna and pleaded with him that she does not want the Brahmins to die. Krishna asked her to go to Brahmins and tell them that she will offer gold equivalent to the weight of the murthy if they agree to return to Dwaraka and use the gold to spend their rest of the life. Ganga Bhai did the same and all the Brahmins were happy that they are going to get so much of gold ( as the muthry could not be brought out of water by 20 people) and accepted to the condition that they will return to Dwaraka once they receive gold in equivalent to the weight of the Murthy.

Ganga Bhai went back to Krishna and asked how she is going to provide gold equivalent to the weight of the murthy. Krishna told her to keep the nose ring (Mukkuthi) on one side and he will take care of the rest.

On the bank of the river a Thula Bharam was arranged and Ganga Bhai was asked to bring the murthy from the river. She lifted the murthy in one hand and brought to the shore and kept in Thula Bharam. On seeing her lifting the murthy in one hand the Brahmins were shocked and came to know that they are not going to get much of gold. Ganga Bhai kept her nose ring on the other side but the weight was not equal. Then she kept a Thulasi leaf along with her nose ring and all that the Brahmins could get was only the nose ring and a thulasi leaf. They pleaded to Ganga Bhai to allow them to stay for one night there in the village and will leave the next morning.

Gnga Bhai pleaded with Krishna on behalf of the Brahmins and Krishna asked her to inform the Brahmins that they will get another murthy in 3 months time in a canal near Dwaraka and they should not dig the canal before the expiry of 3 months. Brahmins went back to Dwaraka and could not wait for 3 months and dug the canal and found a murthy. But Krishna was ashamed of the Brahmins deed and closed half of his eyes as he does not want to see them all. Hence the murthy in Dwaraka has half eye closed and only in Dakor you can see the Lord with full eyes open.

After visiting Dakor Dwaraka, we returned back to Ahmedabad and stayed.

Nath Dwara is in Rajasthan and one of the beautiful temple. Krishna here is considered to be a child and darshan is available only for 15 minutes at a time. This temple is managed by Vallabacharya sampradayam. Arrangement is well made in the temple for all the devotees to have the darshan with in the 15 minutes.

When you visit the temple you should notice the following without fail:

Lord Krishna has a new Alankaram every day for 365 days. He is also offered Laddu and Pan (Betel leaf) during night, as it is considered child Krishna may feel hungry during the night and will eat Laddu.

On the way to Nath Dwaraka one can visit Shamlaji temple.

Very small Krishna and difficult to make out.

Had a dip at Pushkar sarovar and offered Pithru Tharpanam.

Venugopala Swamy temple has Sri Ranganathar (in a very short form) also. Sri Ramanuja in this temple is taller than the Ramanuja at Thondanur and not to be missed.

Name of the hotels we stayed:

Somnath: Hotel Kaveri – Do not recommend this as one has to climb stairs and the rooms are average

Dwaraka: Hotel Dewang – Not a bad hotel in a place like Dwaraka

Amrita Rus at Dwaraka, The Grand Thakar at Dwaraka.